A final regional workshop marked the end of our successful project with the Argentinian system operator CAMMESA and GIZ Chile, within the framework of the develoPPP funding programme, which GIZ implements on behalf of the German Federal Ministry for Economic Cooperation and Development (BMZ). The goal of the Public Private Partnership was to transfer knowledge on the Virtual Power Plant, best practices in power forecasting and grid load forecasting to Argentina and Latin America to support a successful energy transition.

The main idea was to show in a pilot project the benefits of the Virtual Power Plant technology – until now largely unknown in Latin America – for efficiently monitoring and controlling large numbers of vRE assets. For more than two years a Virtual Power Plant was provided in combination with vRE forecasts to CAMMESA to enable a real-time monitoring of feed-in schedules from solar and wind power plants in its power system.

The project came at the right time since vRE auctions had triggered a dynamic expansion of large-scale plants Argentina, with wind parks heavily concentrated in Patagonia and solar parks in the Northwest of the country. Until the end of 2021 the installed capacity had increased to more than 5 GW which contributed 13% to the electricity supply. In the pilot project our VPP and power forecasts covered 34 wind farms (3 GW) and 10 solar parks (487 MW) which made up about 70% of the entire installed vRE capacity. In our final workshop we presented the benefits of the technologies and shared the key findings of the pilot project with more than 30 participants from grid operators, regulatory authorities and development organisations from ten Latin American countries. We enjoyed the very lively discussion, muchas gracias! 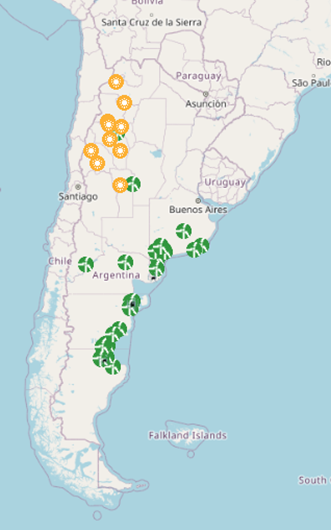