And yet another solar eclipse

Like last year this year again a partial solar eclipse will take place over Europe. On October 25, 2022, this event can be admired, with the moon partially moving in front of the sun during the day. The shadowing begins in the early morning hours over Iceland, extends in the course of the day mainly over Europe and the Middle East and ends at dusk over India.

In Germany, the natural spectacle can be observed around noon between 11 am and 1 pm. However, it will hardly be perceptible if one does not consciously pay attention to it, since the maximum coverage is only between 18% in the southwest of Germany (Lörrach/Baden), and 35% in the northeast of Germany (Rügen). Solar power generation in Germany would be 5% lower in sunny weather on this day than without the eclipse, which corresponds to 10 GWh of energy.

energy & meteo systems reliably takes into account the reduction in solar power generation caused by the solar eclipse in its forecasts. For the first time, the impact of a solar eclipse on electricity generation received greater attention in Germany in 2015: at that time, this phenomenon was particularly relevant for the energy industry and grid operations, as the solar electricity generated accounted for a considerable 30% of the German electricity mix on a sunny March day. 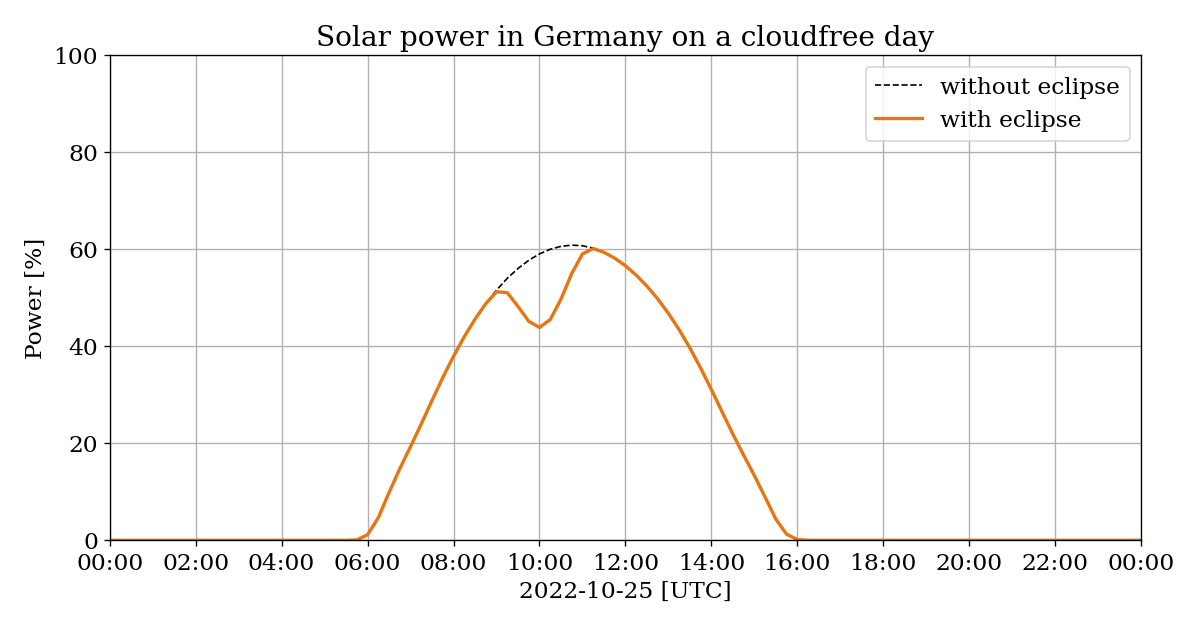 Accordingly, March 20, 2015, was awaited with much excitement and careful preparation in the energy industry and especially in grid operations. In less than an hour, solar irradiance over Germany reduced by 65-80% during midday and was back to full again only a short time later. This fluctuation of solar energy in a short time is much stronger than during sunrise or sunset or clouds, which are not so large and do not move so fast.