Interested in more news about renewable energies and energy & meteo systems?
Just have a look in our German News Archive. 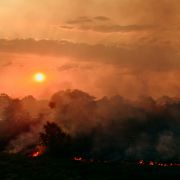 On 12 September 2020, a phenomenon similar to the effect of Sahara dust in the atmosphere could be observed over parts of Germany leading to a reduced solar power production. The forest fires in the Western USA generated soot particles that were hurled to high altitudes and then transported by the jet stream to Central Europe.

Oldenburg, 17 September 2020 – To implement the new Redispatch 2.0 requirements, nine distribution system operators of the E.ON Group are relying on the know-how of energy & meteo systems. The German energy service provider provides an innovative software solution for the complete Redispatch 2.0 system. Oldenburg/Istanbul, 1 September 2020 – For the first time, geothermal plants with an installed capacity of 103 MW were recently added to the Virtual Power Plant in Turkey operated by Pure Energy. With this step the Turkish power trader and energy & meteo systems, the German provider of the Virtual Power Plant technology, have reached the next milestone in their collaboration.

Reliable power forecasts for the largest solar parks in the world 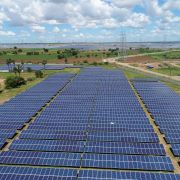 Oldenburg (Germany), 29 June 2020 – In the sunny south of India, the Pavagada solar park covers a remarkable area of 53 square kilometers and ranks currently with a total output of around two gigawatts second place among the world's largest solar parks. Since the beginning of 2020, energy & meteo systems has been forecasting the power generation of this park for the companies Tata and SB Energy – two of the largest operators of the park, which together are responsible for around 700 megawatts of plant capacity. 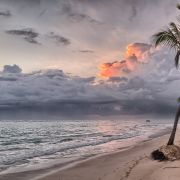 With immediate effect, energy & meteo systems will deliver day-ahead and intraday forecasts for a period of twelve months for four solar and nine wind farms with a total capacity of 557 MW to the transmission system operator OC-SENI of the Caribbean state. 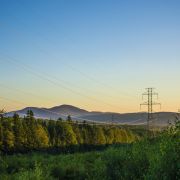 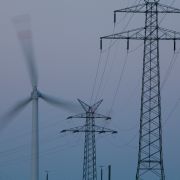 Oldenburg, 13 December 2019 – With its project FuturePowerFlow for grid operators, the software developer energy & meteo systems is one of seven German and in total 75 European companies selected last week by the European Innovation Council as worthy of funding. Thanks to the exact planning of the grid integration of renewable energies for a period of 48 hours, grid operators will for the first time be able to detect impending bottlenecks in the electricity grid at an early stage and take proactive countermeasures.

Oldenburg, 28 Oktober 2019 – As the first suppliers in Germany, the energy service provider energy & meteo systems and energy group Alpiq have integrated the SOGL into the direct marketing process. 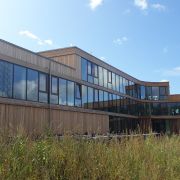 Oldenburg, 18 September 2019 – Two slides, colorful lamps and walls, round corners, tapering halls – the new building moved into by energy & meto systems is not only uncommon when seen from a technical and architectural standpoint. 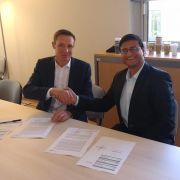 Lyon/Oldenburg, 27 June 2019 – CNR, the first French producer of exclusively renewable energy, and energy & meteo systems have signed a contract in order to stop and restart wind and solar power plants in case of negative prices.

Oldenburg, 17 May 2019 – A new battery storage system by the public utility company Bordesholm has, for the first time, reached a primary power control level (FRR) of 10 MW upon its implementation in the Virtual Power Plant by energy & meteo systems. Moreover, the combination of battery and Virtual Power Plant is applicable to other flexibility markets. 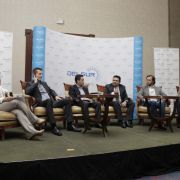 Good news for customers of the software developer energy & meteo systems with critical infrastructure. The company, which specializes in the integration of renewable energies into power trading and electricity grids, obtained its certification according to ISO/IEC 27001:2017 from PwC Certification Services GmbH in Berlin.

A newly developed simulation tool is to aid the South African energy provider Eskom in grid planing as well as in meeting the demands of future power production. In the process, the company will address the massive development of rooftop solar installations in South Africa.

Wind farm operators especially in the USA and Scandinavia will be pleased. The icing prediction from energy & meteo systems profits from even more precise predictions by the new partner project PiB, "Predictive, intelligent operational control for reducing the risk of icing for wind energy turbines."

At the E-world energy fair from 6-8th February 2018, energy & meteo systems presented the new Virtual Power Plant features. On a large-scale touch screen, interested guests could become acquainted with the new emsCom product, how throttling techniques are analyzed as well as with our virtual portfolios.

Wind and Solar Power Predictions in El Salvador and Mexico

The expanding dynamics of renewable energies in Mexico and Central America is increasing the pressure to respond to changes made by incorporating professionally developed forecast models as the basis for planning and ensuring system stability.

Workshop on the topic of forecasts for renewable energies

The distribution grid operator DelSur and energy and meteo systems executed the second phase of the program DeveloPPP by the Federal Ministry for Economic Cooperation and Development, which engages in the promotion of innovative projects in developing countries in order to bring medium and long-term advantages to society.

The share of electricity from weather-dependent wind and solar energy in the German power mix keeps growing. That puts pressure on the electricity sector to be much more flexible in managing power demand and supply.

The rise of volatile wind and solar power in the share of Germany's electricity generation means that keeping the grid stable becomes an ever more complex – and potentially costly – task. Predicting how many renewable megawatts will be fed into the network at any given moment is key to a safe and efficient management of the electricity network.

The Virtual Power Plant by energy & meteo systems has been licensed for connecting to the EPEX Spot per API interface (M7, ComXerv). Active immediately, customers using our Virtual Power Plant can trade their energy quantities directly at the EPEX Spot in the continuous intraday market. Via the integration of order books as well as other useful trading functions, operations can be executed directly on the market and without serial interfaces.

Offshore lays claim to base load in Germany

energy & meteo systems and the consulting company Consentec were commissioned last year by the Federal Ministry of the Environment to examine the impact of the planned offshore wind capacity on the secondary and tertiary reserve energy of the national electricity system.